Chisholm House is named after our patron Caroline Chisholm. Caroline Chisholm was born on the 30th of May 1808 in the United Kingdom. She was the 16th child in a very large family. When she was 6 years old her father died, leaving the family with very little money. This no doubt greatly influenced her desire to assist young, single women to get jobs, along with the setting up of homes for immigrant women. Her motto, “to serve all justly and impartially,” best emphasises her want for everyone to be treated equally.

Did you know that she is also the face of the $5.00 note?
I am inspired by Caroline’s ability to understand when people are in distress and to find a way to assist them. She was a woman of great compassion and care.

Caroline Chisholm embodies the values of Faith, Courage, Tolerance, Compassion, Dignity and Justice, and we hope that as members of Chisholm, you will strive to uphold these charisms.

We are yellow in colour, which represents happiness, hope and spontaneity. 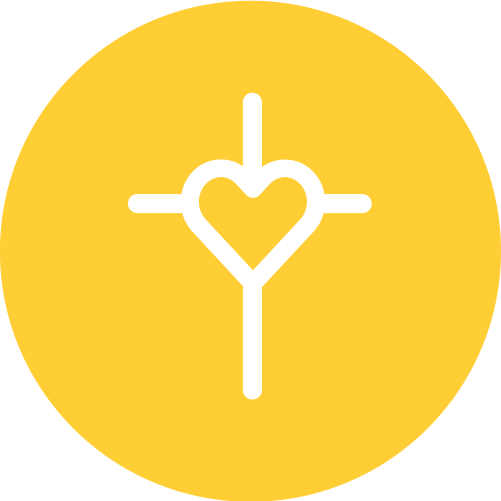 Chisholm House Symbol: The cross symbolises Caroline Chisholm’s devotion to Christ and the Catholic church. The heart is the hallmark of love and compassion.

Other symbols often associated with Caroline Chisholm
Quill & Paper: the quill and paper is often seen in imagery of Caroline Chisholm, reflective of her writing and advocating for the rights of others.
Compass & Ships: the use of ships or a compass signifies navigation, and the guidance Caroline provided to immigrants in accessing new opportunities, opening doors to establish a better life in Australia.

Yorta Yorta Clan: Ulupna – this clan represents creating an environment where everyone feels at home.

Born on the 10th of January 1936, Burnum Burnum was a Woiworrung and Yorta Yorta sportsman, activist, actor and author. He was born under a sacred gumtree at Mosquito Point on Wallaga Lake Aboriginal Reserve in New South Wales, in 1936.

Taken from his family as an infant, Burnum Burnum spent his childhood at the United Aboriginal Mission in Bomaderry and the Kinchela Home near Kempsey as Harry Penrith. He would later take the name of his great great grandfather, Burnum Burnum (meaning ‘Great Warrior’) of the Warundjeri people.

In the 1960’s he began searching for his Aboriginal identity. He ran an Indigenous social tennis club based at Surry Hills, NSW and joined the battle for Aboriginal rights including being part of the historic establishment of the Tent Embassy in Canberra in 1972. On the 26th January 1988, the year of the Australian Bicentennial, Burnum Burnum travelled to England and claimed the country on behalf of Aboriginal people. In planting his flag on the White Cliffs of Dover, he read out a declaration, offering a “fresh start” to the European colonists, before listing all that was done to the Aboriginal people upon Australia’s colonisation .

Burnum Burnum exhibited great courage and passion for the justice and dignity of his peoples, much like Caroline Chisholm did for refugees. This is why we have chosen him to be Chisholm’s prominent Yorta Yorta person.

Centrecare is a well-respected Catholic not-for-profit organisation providing a variety of counselling and professional social services inspired by compassion and respect for human dignity.

Dear God,
We pray that we can embody the charisms of our house patron, Caroline Chisholm.
Give us faith, to share Your good news with all.
Give us humility, to serve everyone justly and impartially.
Give us courage, to reach out to all, especially those at the edges.
Give us the strength to lead in your way.
Amen.