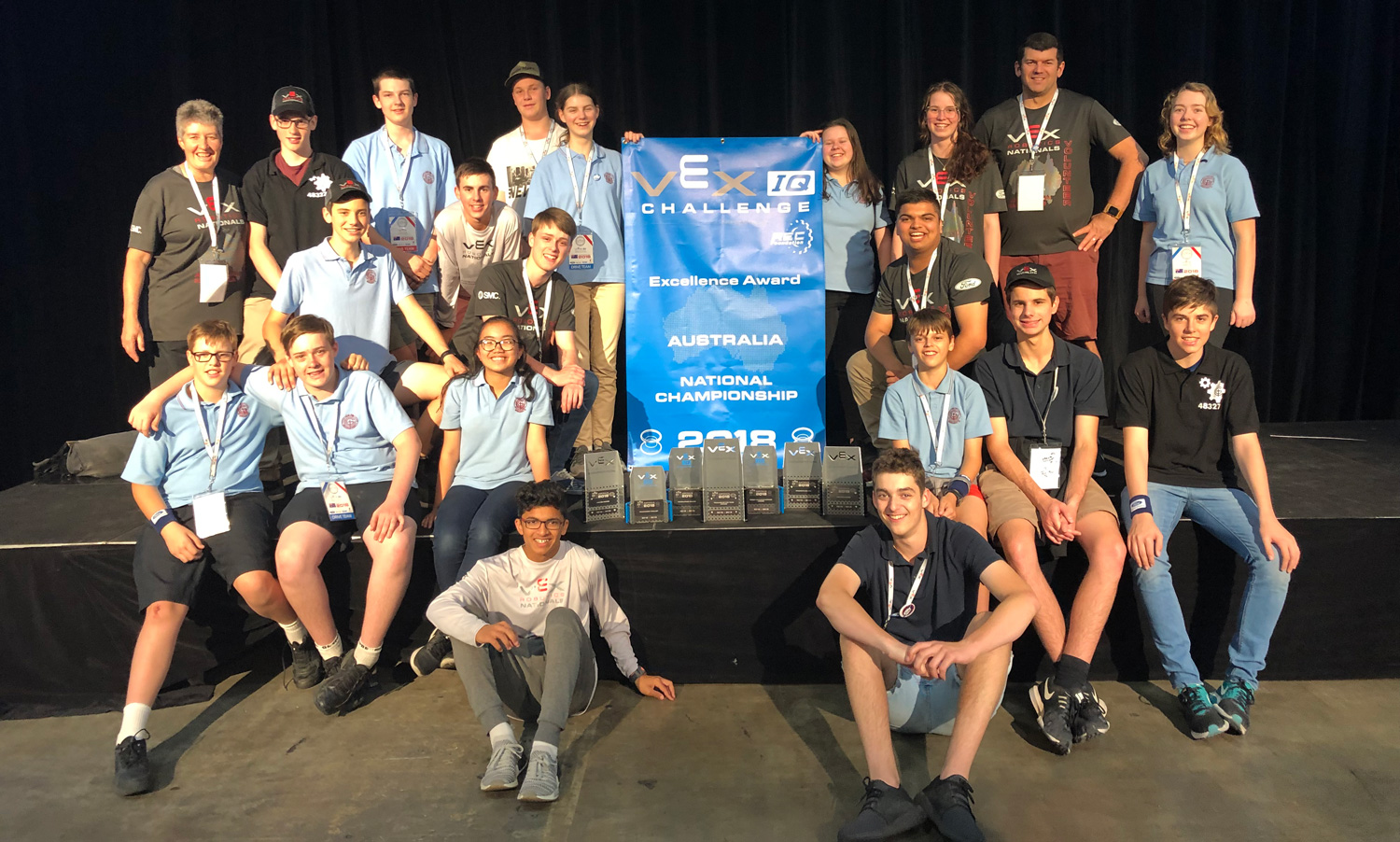 Galen’s amazing VEX crew have had success once again, bringing home a haul of 7 awards and a place at the VEX World Championships after the Australian National Championships in Melbourne over the weekend (Friday 30th November through to Sunday).

Day 1 didn’t go quite to plan, after checking in, the Junior Team discovered their robot was illegal due to it being oversized. Despite initial panic, the team calmly went about ensuring their robot was modified and legal, however this also meant that their robot’s autonomous mode was thrown out of kilter. After a further 20 minutes of testing and tinkering the team fortunately had their robot ready for the field and performing better than it had been previously. “It was amazing seeing them work as a team to get back into the game”, noted teacher Maree Timms.
“It was a great display of resilience and problem solving, embodying everything that VEX is about”, added teacher Brett Webber.

After competing in many rounds over the weekend, teams managed to walk away with the following awards:

A seventh very notable award was the VRC Teachers of the Year Award, presented to Maree Timms and Brett Webber. Only through their passion and dedication has Galen been able to achieve in this area, leading students all the way to the USA as well as promoting and growing VEX education Nationally.

With Galen’s Junior VEX IQ team 48327W off to Worlds in April next year, the students are very excited about the opportunity ahead. This team will comprise of year 8s, Paris McLaurin, Jorja O’Connor and year 7s Chiara Lestino and James Parker. This team have truly done a remarkable job, presently ranked 49th in the world, out of 1626 teams. Having worked on their robot since July during many recess, lunch and after school sessions, their hard work has certainly paid off.

James and Chiara both commented that they are looking forward to the journey ahead, meeting other people from around the world and seeing the way they design their robots. When asked if there’s anything else they’re looking forward to in the USA, Chiara can’t wait to explore the aisles of Walmart, while James noted experiencing authentic KFC chicken from Kentucky!

Over the weekend, Year 11 student Madalynn Baumanis was the FORD #GirlPowered Champion at the event. She played a key part in the Opening Ceremony by being part of the #GirlPowered Q&A session with Lee Constable science TV presenter of channel 10s ‘Scope TV’, a teenage science show and Girls in STEM Advocate.

Year 11 students Rutvik Chaudhary and Tristan Roleff took on the roles of MC’s and Commentators on the day, and got to teach Lee Constable the technical side of VEX, commentating alongside her all Saturday. On Sunday they had the honor of commentating all the VRC Finals.

Maree and Brett also commented “It was fantastic to see the number of parents that drove down to cheer the Galen squad on”.