MacKillop House is named after our patron Saint Mary of the Cross MacKillop. Born in January 1842, Mary was an educator, a pioneer and a leader. She had compassion for others regardless of their situation or circumstance.

She worked hardest for those who were poor and marginalized and helped these people realise their full potential through education and learning life skills. Ten years ago, on the 17th Oct, Mary was canonized and recognized as a Saint for her work with others. Since then people from many cultures, from different faiths and traditions and all walks of life have been inspired by her examples of faith, service and love for all.

I am inspired by Mary’s values of forgiveness, respect, courage and leadership. Her motto was – “never see a need without doing something about it”. These are important values that we can be inspired by and take into our own lives as we travel on our learning journey.

St Mary of the Cross MacKillop embodies the values of courage, justice and work for the poor and we hope that as members of MacKillop, you will strive to uphold these charisms.

We are red in colour, which represents energy, passion and courage. 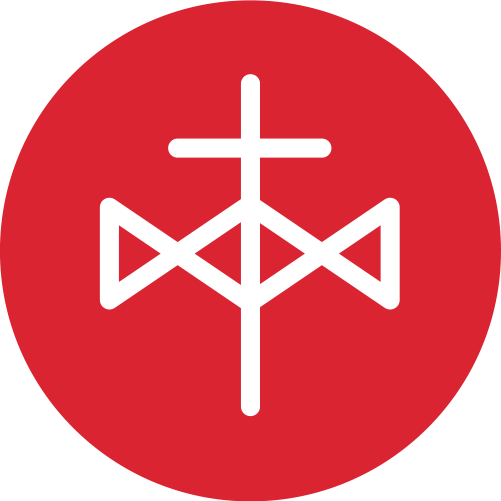 MacKillop House Symbol: resembles the ‘Josephite’ Cross worn by the Sisters of St Joseph of the Sacred Heart (the Josephite Emblem) has its origin in tradition, and is symbolic of the devotions that were special to Mary MacKillop and Julian Tenison Woods.

In the early days, the Sisters wore a monogram of blue braid on the front of their brown habits. The shape of the monogram was the A of ‘Ave’ and the M of ‘Maria’ (a popular prayer to Mary the Mother of God). The Cross: Mary called herself ‘Mary of the Cross’ and was called on to bear the cross many times throughout her life.

Scapular/Rosary: the word scapular indicates a form of clothing which monks wore when they were working. With the passage of time, people began to give symbolic meaning to it: the cross to be borne every day as disciples and followers of Christ. Rosary beads are used to help Catholics count their prayers. Catholics often pray the rosary to make a request to God, some to thank God for blessings received or for requesting a special favour, for example if someone is sick to help them recover.

Born on the Cummeragunja Mission on the New South Wales banks of the Murray River in 1906, Sir Douglas Nicholls’ multi-faceted athletic prowess was his ticket out of there. In 1927, he moved to Melbourne, hoping to play football. Initially recruited by Carlton, Douglas left after hearing derogatory remarks from his teammates. He went on to star at Northcote, drawing large crowds and helping his team win the 1929 premiership. At the same time, he continued to excel as an athlete and a boxer.

In 1932, Sir Douglas moved to play for the Fitzroy Football Club, where he would remain until he retired from playing. It was here in Fitzroy that one of the most important Aboriginal rights movements would arise, with Douglas as one of the main forces behind it.

After his mother’s death in 1935, Douglas became a pastor and led the church services from Fitzroy’s Gore Street Mission. He was chosen to give the first Aboriginal Day of Mourning speech in 1938, during which he expressed that “”Aboriginal people are the skeleton in the cupboard of Australia’s national life…outcasts in our own land.”” It was a powerful line that, for the first time, made many sit up and take notice.

Douglas enlisted in the Second World War, but was recalled from service at special request in 1942, in order to continue addressing the social problems that plagued his community. The same year, he married his wife Gladys.

In 1957, Douglas helped found the Aboriginal Advancement League which would go on to take a leading role in lobbying a government on Indigenous issues, including during the 1967 referendum that saw Indigenous people counted in the national census – a symbolic win.

The success of the organisation gave rise to the national Federal Council for the Advancement of Aborigines and Torres Strait Islanders. At the same time, he continued to serve his community by setting up hostels and helping find employment for young people newly arrived in Melbourne.

Sir Douglas Nicholls never shied away from exposing the realities of prejudice and inequality, much like St. Mary MacKillop. This is why we have chosen him to be MacKillop’s prominent Yorta Yorta person.

From mental illness to marriage breakdown, financial stress to family violence, drug abuse to disputes over custody arrangements – we can support individuals and families to get their life back on track.

Dear God,
In Mackillop, we aim to serve our community;
With kindness, faith and integrity.
Bless the bonds of our friendships that unite us together,
To guide and comfort our peers who may be struggling,
Respecting each other’s qualities and embracing Galen’s culture of life-long learning.
Help us to go through challenges with courage.
Open our eyes and ears, our hands and hearts to find the gifts in each other.
May our thoughts and words be for the better of this community.
Amen