Patrick House is named after St Patrick, the patron saint of Ireland and whose name was taken in the naming of our local church. St Patrick was born in the fourth century AD and played an important role in converting the native Irish to Christianity, travelling around the country performing baptisms and confirmations.

St Patrick is also surrounded by various myths and legends, and I look forward to you learning more about his interesting life and the spiritual impact it has had on us. I am very excited to be associated with Patrick House and I am looking forward to us creating a house culture whereby we are inclusive and that we always care, respect and support each other.

St. Patrick embodies the values of Faith, Devotion, Strength and Conviction, and we hope that as members of Patrick, you will strive to uphold these charisms.

We are light blue in colour, the official colour of Saint Patrick. Blue represents reliability, understanding and wisdom. 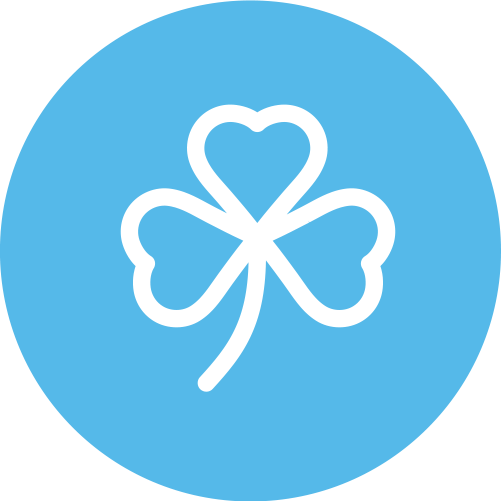 Patrick House Symbol: Irish legend has it that the shamrock (three-leaf clover) was a symbol that St. Patrick used to explain the Holy Trinity (Father, Son & Holy Spirit) to the pre-Christian Irish. The three leaves are also said to stand for faith, hope and love.

Snakes: According to legend, St Patrick, drenched in green attire, stood on a hilltop and waved his staff to herd all the slithering creatures into the sea, expelling them from the Emerald Isle. The legend says there hasn’t been a snake seen in Ireland since 461 AD.

This folklore is a myth and, according to historians, not meant to be taken literally.

Historians say some believe that the snakes often symbolize evil in literature, so when Patrick drove the snakes out of Ireland, that meant he rid Ireland of “evil” paganism and brought Christianity to the green isle.

Yorta Yorta Clan: Pangerang – this clan represents the parish of Wangaratta as does St Patrick.

Born in Condobolin, New South Wales, in 1937, Dr. Mary Atkinson was a Wiradjuri and Bpangerang elder who dedicated her life to the pursuit of equality for Aboriginal people, particularly in the area of education, which she saw as fundamental to changing lives for the better.

She grew up in Narrandera and Leeton with her 13 siblings, leaving school at a young age to find work to help support her family. Even as a teenager, Mary was devoted to fighting the disadvantage experienced by her people; she was only 17 when she and her sisters organised a concert to raise money for Aboriginal children attending school in Leeton.

At 19, Mary married Kevin Atkinson. The couple would go on to have five biological children and foster two more. Inspired by the work of their parents, all of her children would go on to be involved in Aboriginal affairs.

Mary and her husband lived at Cummeragunja between 1965 and 1977, during which they campaigned to have the land returned to the residents of the old mission. She was an active member of the Federal Council for the Advancement of Aborigines and Torres Strait Islanders (FCAATSI) and lobbied for the 1967 referendum that saw Indigenous Australians counted in the national census for the first time. Mary also helped found the Cummeragunja Day Care Centre in 1968.

After moving to Shepparton, Mary continued to be involved in Aboriginal affairs. Mary believed that all Aboriginal children had the right to quality education. She became one of the first regional members of the Victorian Aboriginal Education Consultative Group in 1978, and founded a local branch the very same year. Throughout the 80s and 90s, Mary helped establish a variety of educational services to support Indigenous people, such as; the Lidje Child Care Centre, Minimbah Aboriginal Adult Education Program, Manega Aboriginal School Annexe, Batdja Aboriginal Pre-school, and the Koorie Intern Teacher Program. She was also amongst the group of respected Elders whose experience and advice was crucial to the establishment of the Institute of Koorie Education at Deakin University in 1986 and she played a key role in shaping its content and was chair of the Institute’s board from 1988 to 2000.

In 1990, Mary was elected the President of the Victorian Aboriginal Education Associated Incorporated, in which she achieved a formal partnership between the Aboriginal community and the Victorian Department of Education to ensure collaboration and consultation in all education-related policy.

In 2000, Mary and her husband returned to Cummeragunja to live. That same year she received an honorary doctorate from Ballarat University in recognition of her contribution to Indigenous education. She was named Indigenous Elder of the Year and was elected a patron of the NAIDOC program in Victoria. In 2001, she was inducted into the Victorian Honour Roll for Women.

Dr. Mary Atkinson was completely and utterly devoted to her life’s work, displaying a similar devotion that St. Patrick has. This is why we have chosen her to be Patrick’s prominent Yorta Yorta person.

Lord our Father,
Saint Patrick was chosen by you to preach your glory to the people of Ireland.
By the help of his prayers, he followed Your Son’s devotion of trust in God and has been a source of inspiration for Christians across the world.
As a humble, pious and gentle man, he spreads Your message of faith and strength through his teachings of Christ.
May we gain the values of devotion and strength, just as Saint Patrick, to continue to believe in you God and each other.
May we follow the footsteps of Saint Patrick to strive for loyalty and hope towards you.
We ask you Lord, through mercy, grant conviction for those in need of Christ’s guidance for faith.
Live Jesus in our hearts, forever.