Brigid House is named after our patron St. Brigid of Kildare. She lived roughly 1500 years ago in Ireland and is one of Ireland’s patron saints. She is also the patroness of the Brigidine Sisters who would go on to co-found Galen.

Brigid is well known as a woman who is caring and healing, has strength of mind and character, and who is welcoming and hospitable to everyone. Did you know that she set up her own group of sisters and that they led a very sustainable life? Brigid would milk the cows, churn the butter, grow the crops and bake the bread. She loved the environment and was passionate about caring for the Earth. St Brigid would welcome all people and she set up a fire that would burn always, a light in the darkness. The sisters at Kildare kept the flame burning for a thousand years, and although wars happened and the flame went out, the Brigidine Sisters re-lit the flame in 1992 and it continues to burn to this day. St Brigid performed many miracles and was always kind to everyone she met.

St Brigid’s love of Jesus and God and her compassion for everyone she met inspires me to try to live a more welcoming and kind life, where we look after the planet and each other with love. After all, Brigid believed that “Christ dwells in every creature.”

St Brigid of Kildare embodies the values of strength, hospitality, hope, kindness and justice,  and we hope that as members of Brigid, you will strive to uphold these charisms.

We are white in colour, which represents simplicity, positivity, faith and hope. 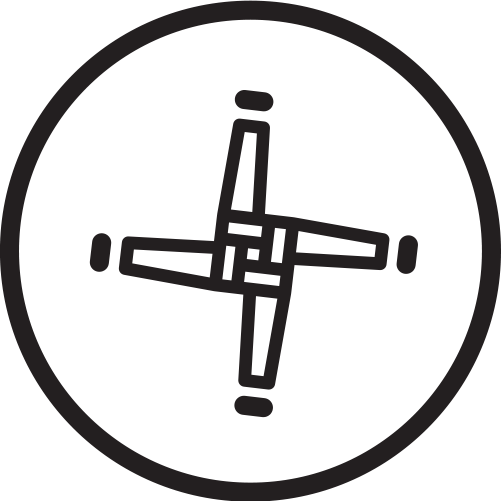 Brigid House Symbol: Brigid’s symbol is the cross made from rushes. Woven by her from the green rushes that formed the ‘carpet’ on the floor of a chieftain’s house as he lay dying, she explained the life and death of Jesus. When he listened to her story, he asked to be baptised before he died. The tradition of weaving the Brigid’s cross is carried on throughout Ireland and in other parts of the world.

According to tradition a new cross is woven each St. Brigid’s Day on 1st February. The old one is burned to protect the house from fire, although customs vary. Some believe that keeping a cross in the rafters preserves the house from fire and disease. In Brigid’s time, most of the houses were straw thatch and wood roofs. The cross is also placed under the barn eaves or in the cow byre to protect the animals.

Brigidine Sisters use the cross as their emblem

Other symbols associated with Brigid

Fire/Lamp: A perpetual flame burned in Kildare in pre-Christian times and was kept alight by Brigid and her nuns until the 16th century. In the Christian tradition the flame is a symbol of the Holy Spirit. To honour that heritage, the lamp of learning is a symbol used today across Kildare Ministries schools in the Brigidine tradition. This lamp denotes the illumination that education brings to the hearts and minds of young people.

Monastery: In her left hand, Brigid holds the symbol of her monastic foundation, under the famous oak that gives ‘Cill Dara’ (Church of the Oak) its name.

Brooch: Brigid also established a school of art and metal work which became famous for the high quality of designs and products.

Bishop’s Crosier: In her right, she holds the crosier denoting her dignity as Abbess, conferred by St. Mel of Ardagh, giving her leadership over the church in Kildare and over her dual monastery of men and women.

Animals: Brigid had a deep respect for all creation.

Jewelled Sword: The sword reminds us of Brigid giving away her father’s precious sword to a poor person so that he could barter it for food for his family. Brigid’s foot on the sword signifies her renunciation of wealth and her abhorrence of violence.

Reference: The Icon of St. Brigid

Born in 1861, William Cooper was a mobilising force  in the early fight for Indigenous rights. William spent the majority of his life near the junction of the Murray and Goulburn rivers, he lived on missions and state-funded reserves in New South Wales and Victoria, including the Maloga Mission, where he met his first wife, and the Cummeragunja Mission, where he moved shortly after his establishment in 1886. After the death of his first wife, William married a woman named Agnes and lived with her and their six children.

The freedoms of the Aboriginal families who lived at Cummeragunja were severely restricted. However, they were allowed to farm their own allotments. From 1908, however, the independence afforded to Cummeragunja residence was eroded. The New South Wales Aborigines Protection Board cut investment and repossessed farmland. William and several other men confronted the reserve’s Board-appointed manager in protest of these policies. He was swiftly expelled from Cummeragunja.

William began to balance farm work with politics, spurred on by the poverty and inequality that surrounded him. He joined the Australian Workers’ Union and represented Aboriginal workers in both New South Wales and Victoria. He championed for remote communities that were denied aid during drought and the Depression. He learnt basic literacy.

In 1933, William relocated to Melbourne with his third wife Sarah. William became a prominent figure amongst Melbourne’s small Aboriginal community, which, from its base in Fitzroy, was to emerge as a political force in the fight for Aboriginal rights.

One of William’s most famous campaigns was to petition King George V the right to propose a Member of Parliament who directly represented Aboriginal people. In just three years, William obtained 1,814 signatured from around the country. However, a constitutional technicality prevented the Commonwealth Government from passing the petition to the King. William is also known for holding an ‘Aboriginal Day of Mourning’ on 26 January 1938, this coincided with the 150th anniversary of the landing of the First Fleet and raised awareness of what this meant for the Indigenous population. The day evolved into National Aboriginies Day, first observed in 1940 on the weekend before Australia Day. Today the celebrations of NAIDOC Week have their roots in William’s original day of remembrance. William closely followed the civil rights movements from around the world and often drew comparison when campaigning for change here in Australia. In 1938, he lodged a personal protest against the treatment of European Jews in Nazi Germany, walking from his home in Footscray to the German consulate in South Melbourne. This was formally recognised in 2010 at a Jerusalem museum.

Not only was William Cooper’s father a Moira man, but William displayed the same strength and passion for justice that Brigid did. This is why we have chosen him to be Brigid’s prominent Yorta Yorta person.

Dear God,
St Brigid showed us how to live our lives.
To be generous, hospitable, and to act with compassion.
Help us to care for the Earth as St Brigid did.
Help us to stand up for what we believe in.
Help us to follow in Jesus’ way.
Help us through our actions, to be the guiding light for all of those around us.
Amen.