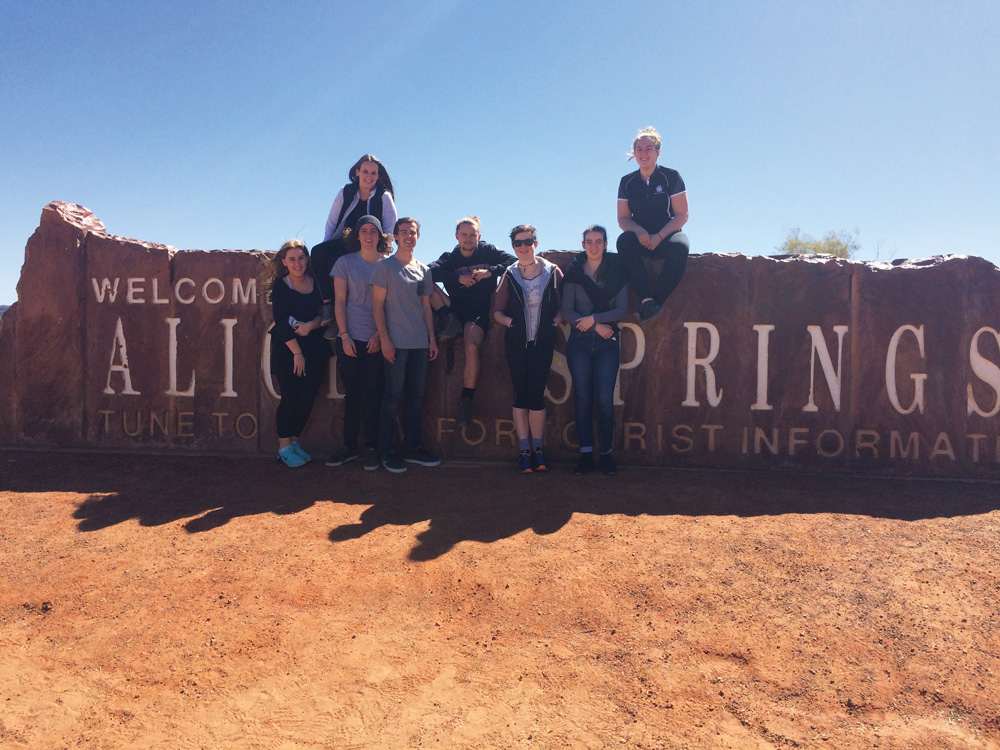 On Saturday the 15th of August, the Santa Teresa group of 2015 left Melbourne to begin our journey to Santa Teresa, via Alice Springs. We arrived in sunny Alice springs around lunchtime and after dropping our bags off at the caravan park and completing our shopping for the week we headed off to tour the Desert Park. The desert park introduced us to the types of vegetation and animals that live in the Northern Territory. Our day finished with tea at an Italian restaurant, followed by a Macca’s ice cream for sweets.

The following day at 11:30pm we boarded the bus with our groceries and bags, and headed out the dusty and bumpy road to Santa Teresa. This was the real beginning of our journey and immersion which saw us go from being tourists to pilgrims.

The following are our descriptions of some of the places we visited and the activities we were lucky enough to participate in whilst at Santa Teresa. 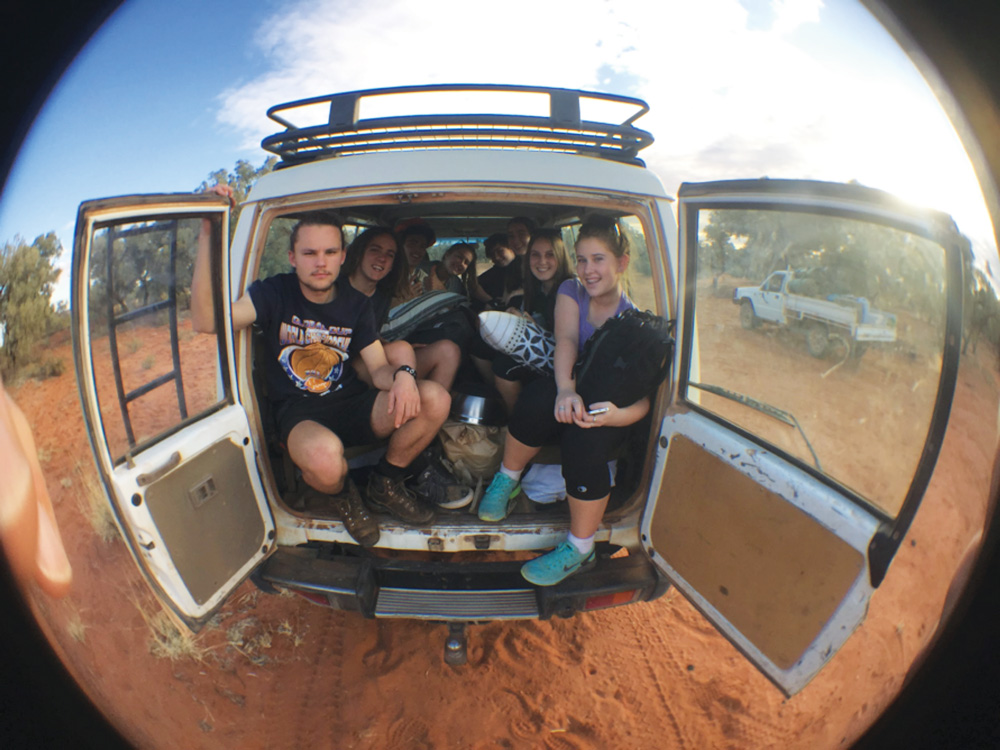 During our week in Santa Teresa we alternated between going to the school and going to the Community Center to volunteer during the day. While we were at the Community Center we made Breakfast Packs for some of the members of the community that otherwise wouldn’t have or receive anything for breakfast. As well as these Breakfast Packs we often helped MC (The Manager of the Community Center) make and package lunches for the older members of the community, like meals on wheels. These lunches were always hot and were made to sustain the people who received them. Once we completed and packaged these meals they were packed into bags (along with other items such as bread, fruit and a Breakfast Pack) and then loaded onto the back of the Buggy that the Center owned. We then delivered the meals out to the elderly in the buggy, we got to speak to the people in the community, as well as listen to stories that Tracy told us of her experiences in Santa Teresa, which was one of the best parts of the week.
Jazmyn Coonan

The school at Santa Teresa was almost like a second home to us, every chance we had we would head on down to the oval, which was actually more like a dust bowl and we would spend some time there with the kids, usually kicking the footy because that’s what they love most. The kids were always friendly and they always had questions to ask us, most commonly we were asked, “What’s ya name?” which we would then get repeated 20 minutes later when they forgot. Unlike Galen, the school at Santa Teresa offers a breakfast for each of the students. Every morning 2 or 3 of us would head over to the school and help out JP at the school canteen. Their breakfasts usually consisted of a hot milo and some toast. Their lunch and recess is also made for them, and it is always something delicious. The kids eat their lunch in class before they head on out to the oval to kick the footy.
Monique Szeligiewicz

On Tuesday afternoon we attended a home mass at one of the houses in the community. It was very informal in comparison to a normal mass we would attend at Galen. The mass was a normal service, although at the end, Father Bosco walked into the house and blessed it with holy water. The home mass was a fantastic experience and a lot of people in the community enjoy it because majority of them aren’t capable of walking to the church and attending a Sunday mass. It gives people in the community an opportunity to participate in a mass comfortably in their own home.
Jack Jenkin 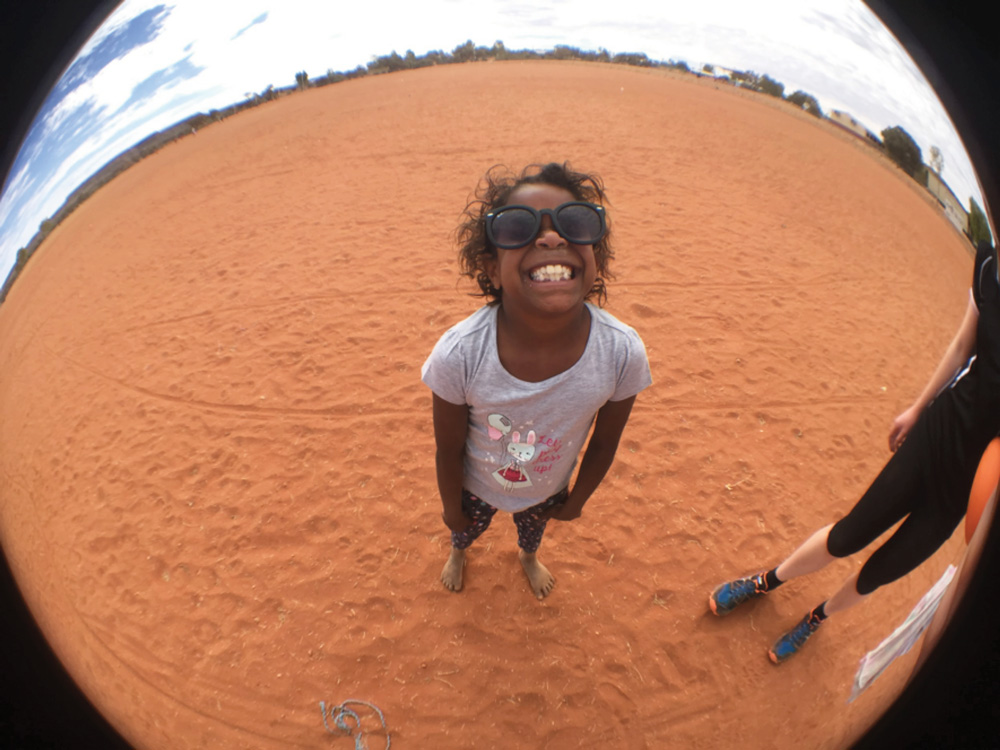 The Spirituality Centre is where some of the women in the town complete artworks including painting ceramic crosses, scarves, jewelry, painting small decorative boxes, signs and small paintings. They sell their artwork to people in the town and visitors, and people who get in contact with them through their facebook page. All the money from items sold at the Spirituality centre goes directly to the women who painted them. It took us multiple visits to decide what to buy because they were all beautifully crafted with intricate traditional dot painting.The spirituality centre is also where Mia, an elder of the town, does traditional healing for some of the Immersion groups that visit the town.
Jess Spence

On the Tuesday night of our stay, we went down to the Rec center to get to know the youth of Santa Teresa better and to see them in a different context to school. The rec center is a large indoor multipurpose room, designed for teenagers to hang out in. It has a basketball court, which they use to play multiple sports, at the same time. There were kids shooting hoops on both ends, kids kicking the footy up and down the court and other kids running in between. There was also an upstairs room, with a couple of pool tables. We were talking to the youth worker, and it was good to see the enthusiasm that she had towards helping the kids and improving the hall for them. We were lucky enough to be there the day they bought some new music equipment, and got to hear the older kids play together as a band. They had recently installed some new Mac computers, and had plans to spend at least $10,000 to get the hall back up and running smoothly.
Billie Shanley

On Thursday afternoon after saying our goodbyes to the school kids and teachers and thanking them all for the week, we went to the spirituality center to meet Sister Liz. This was when we met Mia who is the traditional healer in Santa Teresa, she had a lot of knowledge and stories to share with us all but a lot of her experiences couldn’t be shared with us. After Mia had explained how she was going to heal our spirits we all took turns sitting in front of the smoking fire, so that Mia could see what we needed to repair our spirits. The smoke from the fire was from the burning of a special plant ‘arrethe’, that is used for bush medicine. The way Mia healed our spirits was different depending on what she saw in our spirits, and even though Mia could see our spirits she wouldn’t tell us what she saw. This experience had separate effects on our entire group but the overall comment was that it felt like a massive weight had been lifted off our shoulders.
Jess Delaney

On the Thursday night we went out bush, to go camping under the stars. On this expedition we went for a hike up a small hill where we sat to watch the sun set. We were told stories about people visiting the hill prior to our visit. These stories were about the fact that if we did not respect the land and stick together then the spirits of the land would take us away. The spirits of the land are the traditional owners, that had passed away. After safely coming back down from the hill we came back and sat around the fire while Jack Jenkin cooked a kangaroo tail in the flames and coals. Once the kangaroo tail was cooked, we all tried it and agreed it tasted like lamb shanks. We talked around the fire until it was time to hop in our swags before going to sleep, unfortunately the sky was completely covered with clouds and we couldn’t see any stars, but all in all it was a good experience.
Ollie Noble

On our last day in Santa Teresa, we were fortunate enough to experience an Aboriginal funeral. Due to their beliefs in spirituality it was structured a lot different to a funeral like any that we may have attended. They believe in releasing their emotions and the first thing you hear upon arrival is the wailing. The coffin enters the church first, walked through burning arrethe leaves which smokes the coffin to heal the spirit and then everyone follows closely behind into the church. The coffin is placed at the front of the church and some people come and rest their heads on the coffin and said goodbye to their loved one. Once the service in the church had finished the coffin was carried back outside with everyone following closely behind once again, it was placed in the back of the hearse (which in our case was a single cab Toyota Hilux) and everyone followed it to the cemetery. The coffin was taken to the burial site and everyone waited outside the fences of the cemetery until each person arrives, then they walked in and stood or sat around the coffin. The coffin is blessed before it is lowered into the ground by hand and everyone scoops up a handful of dirt to throw onto the coffin as a sign of respect. Ned Penny

We are very thankful for our experience in Santa Teresa, and we have learnt a great deal about aboriginal culture and their way of life, and their love of family. Feel free to come and ask us questions about our experience as one of the main things we would like to do is pass on our knowledge so that everyone can learn from our opportunity. We would like to say a massive thank you to Sister Liz who taught us so much and gave us the opportunity to learn and see some things that not everyone has the opportunity to. Also to Mrs White, the effort and the time that you put into making sure that our experience was memorable was hugely appreciated and we can’t thank you enough.

Written by the Santa Teresa Group 2015